I guess I should probably start with a bit of an introduction to this blog and to me and to.. Well.. Everything else really. I watched some B-grade zombie movie today and it got me thinking, hence the post. But back to me. Grab a chair, sit down and prepare to read my life story, its absolutely riveting I tell ya.

It’s Really not.. I’m basically just a dumb 22-year-old with a couple of big goals and a shocking fried chicken addiction…

Yep That’s the year the earth was blessed with my presence. The 25th of July 1996 to be exact. I was born in a town in the state of Victoria, which is in Australia. I lived over there for a year and a bit I think and then Mum, Dad and I moved over to Perth, Western Australia. We lived in a Vegemite container and we ate Kangaroo every day.. Ah got ya, just seeing if you’re still with me, this shit’s kinda boring isn’t it? Anyway my mum had another kid – A girl this time, my sister if you didn’t get that. After that we moved to the desert pretty much… A small town just out of Kalgoorlie, called Kambalda. Google it i dare you, It’s literally a few houses surrounded by bush and red dirt… But I kid you not it was the best place to grow up. Camping every weekend, catching tadpoles and Hepatitis from swimming in all the polluted dams it was great. That Hepatitis thing was a joke if you didnt get that either, you’ll start to pick up on my twisted sense of humour as you read more of my posts, pretty much don’t take anything i say seriously.. I’m a potato.

Um where was I? Oh yeah so after about 12 years of living there quite a bit happened surprisingly.. Mum and dad got divorced, Dad moved out and mum met a new bloke and she fell preggo. This didnt all happen at once, my mother has morals. Anyway at the end of grade 6 we decided to leave Kambalda and head back to Perth. Mum wanted to give us kids a better chance at going somewhere in life. So in 2007 my mum had my little brother (He’s now 11 turning 12 and a complete bag of shit. I kid, I kid he’s cool I love him). The next couple of years are pretty boring. Basically I went to school dated a few girls had my heart broke and got my first job at a fast food restaurant (Kids if you’re reading this don’t fucking work in fast food, I think it’s already taken 30 years off my life).

Righto, the year I graduated with honours in nothing, not even lying lol. I had no idea what I wanted to do but I sure as hell didn’t wanna go to uni. Over in Australia we have university instead of college and I guess I wanted to start making money straight up, and not even bother studying to better my future long-term. see I told you I was a potato.. So a year after that I was still working at my stupid fast food job and thinking to myself “wow is this it? Is this gonna be me for the rest of my life?” So I did some research and found out I could still go to uni if I did a 6 week course so I thought ‘fuck it’ and did that. Turns out it was the best thing I’ve ever done. I hate being cringey but I met this hot af chick there and we pretty much hit it off and well yeah 4 years later we live together and i wanna stab her in the eye. Nah not really, she’s my number 1. But enough of that, So I did the course and passed and then decided I wanted to study Psychology. I don’t know why, I guess I like talking to people and helping them through their issues and loved the feeling of actually being able to do that. So there ya have it, started studying that for about a year, then decided ‘fuck this’, I know right im a moron again, just when you thought I was alright… Now I’ve always been into body building and love the gym so I figured hey what a way to make some coin, be a personal trainer. so I went and studied that for 3 months I think, got my Cert III and IV and then landed a job at a gym. Man it was a fun job, training people and getting paid to do what you love. until clients start canceling on you and you’re too much of a nice guy to get angry at them… So after about a year of doing that, we are sitting at the end of 2017. I’ll let you guess what my next job was. don’t scroll down, just have a guess and see if you were right.

Knew you wouldn’t have guessed that one! Yeah so in January of 2018 I got a job driving trucks underground doing fly in fly out. It sucks leaving home after break, but having a whole week at home is UHHHMAZING. Oh I forgot to tell you, I’m going back to university now too though, doing my degrees 100% online though. Yep. Psychology and criminology. Started this week actually.

Heres a few things I missed out that I’ll just put them in dot points, if you want to know more just ask:

Yeah so that kinda my life so far…

Ask me questions, tell me about your life! 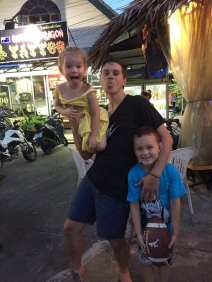 Little nerds I met in Thauland 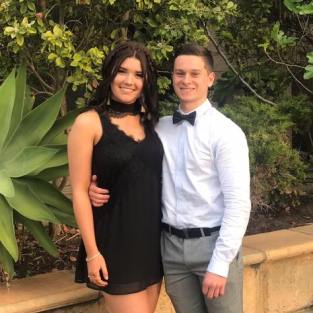 The reason I do it all 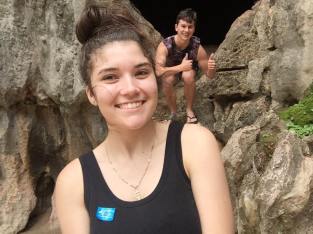 Jess and I in Thailand